Promotional bill (From the collection of Kevin Schmid)

1986 'SOUND OF THE MONKEES' AUSTRALIAN TOUR

"Every date was jammed not only with teary-eyed original fans but with wildly enthusiastic teenagers
who appeared to sing along with the lyrics of every number.  Each show was laced with the slapstick lunacy that the audience would have recognized from the television series, which had been rerun in Australia over the previous two years."
-Glenn A. Baker, author of Monkeemania: The True Story of The Monkees 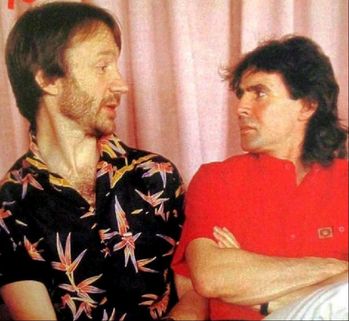 In 1985 Peter Tork attended a concert in New York City featuring the 'Happy Together' tour that showcased several regrouped sixties rock and roll bands. The promoter of the tour, David Fishof, had already started to lobby Peter about the prospects of a Monkees reunion. Tork was impressed with the dynamics of the show and agreed to discuss potential plans about The Monkees returning to the concert stage. Fishof quickly began an effort to reunite the band.

This tour of Australia by Davy and Peter was the first of many concert tours the soon-to-be reformed Monkees would undertake during the next three years.  Micky, who reportedly was the last to commit to a Monkees 20th Anniversary reunion (with the exception of Michael, who initially agreed to a round of concerts but later had to bow out because of prior commitments when the tour schedule ballooned), remained in England where he had been working as a television and video director.  With American music channel MTV airing the television series and Rhino Records already re-releasing the group’s nine original albums (the reissue campaign had initially begun in 1985), plans were underway for Dolenz, Jones, and Tork to embark on a small 20th Anniversary reunion tour of the United States in the summer of 1986. Little did Davy and Peter know that when Micky eventually joined them later that summer in America that Monkeemania Part 2 would explode, ushering in a new era in the history of The Monkees.
Davy and Peter played to full houses everywhere on this Australian tour, visiting smaller clubs and theatres. The duo performed Monkees songs mixed with covers, and were backed by a band that consisted of Lawrie Haley (background vocals), Mark Haley (keyboards), Jem Pictor Wayne (guitar), and a drummer known as The Bishop. For the most part, they shared lead vocal duties on Micky’s songs.